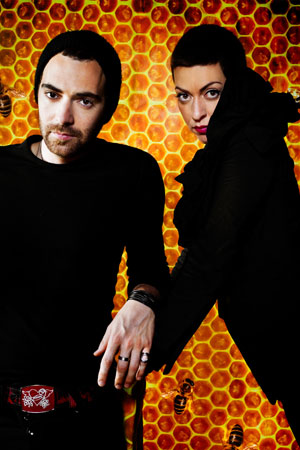 It’s a short list of artists that can claim a Grammy nomination, a Juno nomination and near gold sales on their debut recording but Beast is one such act and Starmaker was right in the thick of making it happen.

Drummer, composer and producer Jean-Phi Goncalves and chanteuse extraordinaire Betty Bonifassi began working together in their hometown of Montreal in 2008. Their self-titled debut album hit the street in November of that year. Having emerged with a buzz, Beast turned the corner into 2009 with a vengeance. On the heels of their New Artist of the Year Juno nomination, their record label (Pheromone) launched an all-out marketing attack, made possible by Starmaker. The campaign was national but with emphasis in Quebec and at the Juno Awards in Vancouver. It included among other initiatives, extensive print and online campaigns and “monster” postering in Quebec and Montreal. Coming out of the Junos with the single “Mr. Hurricane” on the air, Beast had traction and was selling records.

In the Fall of 2009 Starmaker was again true to its mandate, helping to fuel momentum for the band. With Starmaker’s assistance, Pheromone was able to launch an extensive television campaign featuring over 100 paid spots driving home the “buy” message in their home province during the all-important Christmas season.

On the touring side, it is an understatement to say that Starmaker was instrumental in developing the band both in Canada and internationally. It is not possible to imagine how Beast would have been able to set foot in four major foreign markets - the US, France, the UK and Germany - at such an early stage of their development without the support of Starmaker. No less than fifty shows abroad, numerous international showcase events and a successful European summer festival tour were facilitated in whole or in part by Starmaker’s commitment to Beast.

It’s also important to note that Beast’s success took place during continuing challenging times for the music industry AND the biggest economic downturn in recent memory. It takes a confluence of elements to buck those strong headwinds and Starmaker was an utterly crucial component, for which everyone associated with this project is grateful.