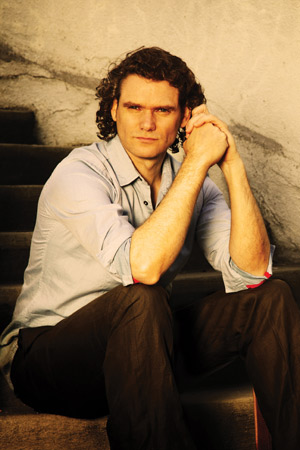 With seven studio albums in fifteen years and widespread recognition as one of the top artists in his field, nuevo flamenco guitarist Jesse Cook is an established fixture on Canada’s music scene. Thanks to the support of the Radio Starmaker Fund, Jesse is now opening new doors to extensive international touring and building upon his existing Canadian success.

Starmaker’s support has facilitated phenomenal growth in Jesse’s U.S. touring activity, along with a substantial increase in the size of the venues in which he performs. Since the September 2009 release of his latest album “The Rumba Foundation”, Jesse has done nearly 50 American dates. With new U.S. agency representation through Monterey International, he looks set to push that number to 100 by summer 2011, including a number of first-time visits to large scale outdoor festivals. All of this, remarkably, in support of a single album.

Starmaker funding is a decisive factor in allowing Jesse to answer and nurture the burgeoning international demand for his music. The past two years have seen a raft of inaugural performances throughout all corners of the globe. Whether it’s taking the stage to rave reviews at the Singapore and Dubai Jazz Festivals, electrifying audiences in Italy and Lebanon or returning to Poland for repeat engagements, Jesse is thrilled to be sharing his art with music lovers worldwide.

In Jesse’s home market of Canada, Starmaker marketing funds have been instrumental in building and maintaining Jesse’s profile throughout his career. This support is particularly important when considering Jesse’s musical genre doesn’t fit the mainstream media’s preference for contemporary, Top 40 and rock. RSF funding has helped ensure that Jesse’s visibility remains high in Canada, allowing new fans to discover his music months after competitors have dropped off the map (and off Soundscan’s world music chart).

At a time when many artists in the music industry are struggling with sales, Jesse continues to see consistent sales numbers for his two most recent releases, “Frontiers” and “The Rumba Foundation”. With the ongoing support of the Radio Starmaker Fund, Jesse looks forward to continuing growth and success, making new inroads both in Canada and abroad.