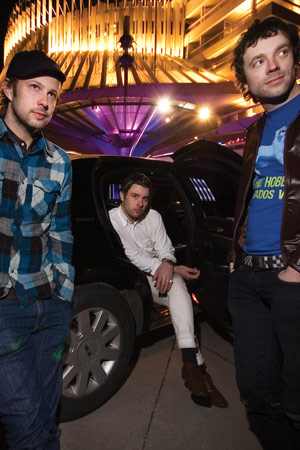 Plants and Animals have benefited hugely from Radio Starmaker Fund support on a variety of international initiatives surrounding their latest release. Their sophomore album “La La Land” was released in North America in April and throughout the UK and Europe in September of this year. Starmaker funded initiatives in the States included retail marketing support at both the independent and chain level, publicity and radio promotion. Marketing initiatives in Europe included publicity and promotion teams and retail programs in the UK, France and Germany.

The band has also received a considerable amount of touring support in all of the aforementioned territories. Without that support, they simply would not have been able to afford to tour as extensively as they have. With tour dates taking on ever-increasing importance to the marketing of a release, this has been a crucial element to the success of the record at an international level. It should also be noted that the RSF’s domestic touring support helped the band to bolster the overall production value of their shows here in Canada.

Plants and Animals continue to build their base in the U.S. market. We have continued to expose the band to an even wider audience and in some cases are only just now starting to see the impact of a variety of initiatives. This bodes well given the band’s continued commitment to tour and work the market, playing into our philosophy as a label of building long-term careers for our artists.

The U.S. publicist has helped bring awareness to a broader media base in an increasingly competitive market. Some highlights included first time positive reviews landed in Paste, Blurt and Vintage Guitar, a Daytrotter session and crossover into lifestyle magazine Men’s Health. Radio saw good progress, with highlights including in-studio sessions with KEXP and WXPN’s World Café, the latter of which contributed almost immediately to a spike in sales.

Though it is still early in the promotional cycle in Europe, we have seen immediate results from the teams we’ve been able to hire as a result of Starmaker support. Our UK radio team has had encouraging success so far with the first single, landing Record of the Week on BBC Radio2 as well as support on 6 Music. In France, we’ve seen great print coverage on the band, including reviews and/or features in Rock n’ Folk , Noise Magazine and Les Inrockuptibles. Germany has been perhaps the biggest surprise success. There’s been a leading “Breaking” feature in Rolling Stone, as well as features in Visions, Piranha, Indie and Intro magazine, the latter of which is part of a three page feature on Montreal artists alongside bands with worldwide reputations like Arcade Fire and Stars.