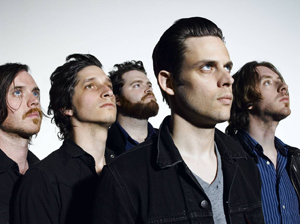 In 2008, The Stills signed with esteemed Canadian record label Arts&Crafts with the mandate of improving the band’s position in Canada. Our goal was to first establish a solid foundation at home in order to put ourselves in a better position financially to build on that success worldwide. The band’s first single, “Being Here”, from the resulting “Oceans Will Rise” release entered the radio charts and stayed in the top ten for an astounding 6 months.

With the support of the Radio Starmaker Fund, we were able to effectively market and promote The Stills throughout Canada and benefit from their most successful release to date. The title garnered two Juno awards, two top ten singles (reaching a combined 30,000 spins) and achieved dramatic digital sales.

With additional help from Starmaker, The Stills were able to embark on several large tours with their friends, Kings Of Leon, who were just breaking through to their biggest successes in many parts of the world.

These tours with Kings Of Leon were a tremendous advantage to us and enabled the band to reach large audiences in the USA, Australia and at home in Canada, increasing sales and overall revenue. This friendship led to The Stills again supporting Kings Of Leon on a massive shed tour this past summer in the States, culminating in a triumphant hometown show at a sold out Molson Amphitheatre in Toronto.

We deeply appreciate RSF’s incredible support for The Stills throughout the past year. With the help of the Radio Starmaker Fund’s various programs, The Stills had their most successful year to date. “Oceans Will Rise” became their breakthrough album at commercial radio and has helped to set up the band’s career at radio.

The Stills are currently in the recording studio working on their next album. We eagerly await the release of their next record and look forward to continued success, thanks to the Radio Starmaker Fund.