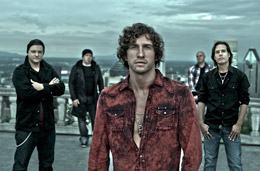 This was quite a year for Jonas & The Massive Attraction with the release of the new album “Big Slice.” We simply could not have done it successfully without the support of the Radio Starmaker Fund. Through Starmaker’s domestic touring program, the band was able to perform throughout Canada to promote the album and first single “Big Slice”, which went on to become a Top 10 track at rock radio. In September 2010, the band received international tour support to showcase for European labels, promoters and agents at Popkomm in Berlin, Germany. They were quickly signed by one of the premier agencies in Germany and we are now preparing for their first ever European release. Domestic marketing support from Starmaker was vital, allowing us to compete with top international artists with strong print, radio and retail advertising campaigns in key markets. With the support of the Radio Starmaker Fund, Jonas & The Massive Attraction are set to take their music to the top in Canada and around the world!