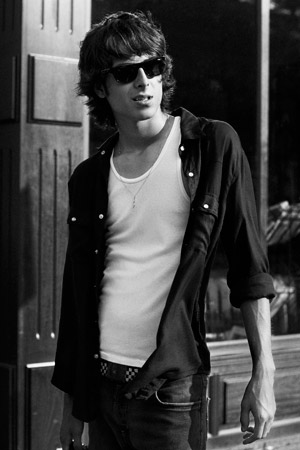 Sometime in 2009 I received a CD from a local publisher with three songs. There was no other information, just a request to “listen to this”. I thought I was listening to a 50 year old immigrant coming out of nowhere, trying his luck in Canada. Not only was I immediately blown away and surprised by the quality of the songs and unique vocals but also to find out that this man was a “kid” of only 20 years, living in a village two hours north of Montréal. A few weeks later, we were in a studio recording Bobby Bazini’s first single “I Wonder”. The song was sent to a number of radio stations in Montréal the same way as I had received the demos - just a request to “listen to this”. The reactions were immediate, with high rotation airplay followed by huge interest from Warner Brothers and Universal in Europe. There was still no album at that point.

On March 9, 2010, Bobby Bazini released his first album “Better in Time” on Montréal based Mungo Park Records. The record has sold close to 100,000 copies to date in Canada and has been in the charts for more than 81 weeks. It won a Felix in Quebec for Best English Pop Album of the Year and was nominated for two Juno awards and the Archambault award. Some of the other highlights during the first year after release included performances at close to a hundred concerts and festival appearances in both Canada and Europe, as well as a major license deal with Warner Brothers for the whole of Europe. To put it mildly, it has been a dizzying start to Bobby Bazini’s career.

Other countries have also been calling, wanting to get in on the action swirling around the artist that MusiqueMag.com has called “The Musical Revelation of the Year”. The venerable French publication Paris Match hasn’t missed the signs either and remarkably dispatched a reporting team to Montréal to meet Bobby and see him in concert for a feature article that subsequently appeared in the May 2010 edition of the magazine.

I can confirm without a doubt, that the Radio Starmaker Fund is one of the most important assets to the Canadian music industry and an example and model to the world. It was an enormous pleasure for us to learn that funds were being made available to emerging artists such as Bobby at such an early and critical stage of his career. It has been simply unbelievable to learn how Canadian artists are financially supported in such a stable and consistent manner.

With his growing success and accompanying demands to tour in both Canada and Europe (with a 5-piece band and a full crew), we would not have been able to tour to the extent we have without the funding from Starmaker. In these competitive and challenging times, it is impossible to imagine how an artist can embark on domestic and international tours and to continue the necessary marketing activities, without the consistent support and commitment from an organization like the Radio Starmaker Fund. It was abundantly clear by the end of 2010 that it was only because of Starmaker’s international touring support that we would be able to accept strategic opening slots for Bobby in places such as the l’Olympia (Paris) and Forest National (Brussels) and to have he and his band, The Brass Tacks, then return for a second tour throughout central Europe. The funding was also crucial for Bobby’s promotional and showcase tour in Europe at the end of 2010.

These touring and marketing grants were extremely important during the growth process for Bobby in Europe. Only the continued in-person presence and performances of a “live” artist such as Bobby in the various markets of the world can guarantee extra media attention, showcase opportunities, the growth of new relationships with members of the industry and ultimately, sales. We are extremely grateful to all the people at the Radio Starmaker Fund that have supported and believed in the career of Bobby Bazini.