Artist Profile: Down With Webster 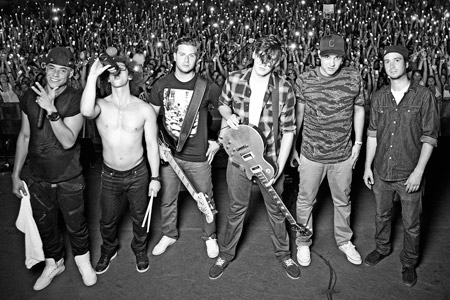 The Down With Webster story began in the late 90’s, while its members were still in high school. The band got together, mixing their various musical influences to create a pop/rock flavor that seemed to immediately create a legion of fans around the greater Toronto area. This was almost 10 years before they even began entertaining offers from record labels and agents in Canada. Their debut mini-album, “Time To Win Vol. 1” was jointly released in October 2009 by Motown in New York and Universal Music Canada and was quickly successful in their home country.

When Down With Webster eventually qualified for Starmaker funding, the album was in full swing, with second single “Your Man” flying high at radio and video outlets. The band continued their hard work and amazing live performances across Canada, opening new foundational markets in Western Canada, partnering with MuchMusic on numerous promotional opportunities and ultimately succeeding in making “Time To Win Vol. 1” a hit. The first Starmaker application helped us feed this fire, providing additional funding for mainstream TV advertising and radio campaigns to support the massive pop radio success being developed. With Down With Webster being a brand new pop/rock band, the doors were wide open to what and where we could spend our marketing dollars; we chose to go big and wide with our campaigns. By the time we moved to the 3rd single “Whoa Is Me”, the album was quickly approaching gold status and the band was playing in front of thousands of screaming fans across Canada. They were also beginning to take hold in Montréal, a very difficult market for Anglo bands to succeed in, although it has now become the #2 sales and social media market for the group over the course of the past year.

Radio Starmaker funding has helped Universal Music Canada and Down With Webster attain many successes, including a gold album, 3 platinum digital singles and multiple #1 videos at MuchMusic. Funding was also received for a wide variety of national and international tours. The Down With Webster fan base continues to grow exponentially as we ramp up our campaign for the release of “Time To Win Vol. 2”. Our goal for this full-length album is to take the band even further and ultimately attain at least platinum sales of 80,000 units.

It is clear that Down With Webster’s sustained success on their debut album would not have been possible without the support of the Radio Starmaker Fund. Starmaker’s continual support of developing artists is extremely important for the future of Canadian culture and spreading our country’s talented artist’s successes worldwide. Our aim is to continue to grow Down With Webster’s presence both inside and outside of Canadian borders, propelling the band and their music to new heights.