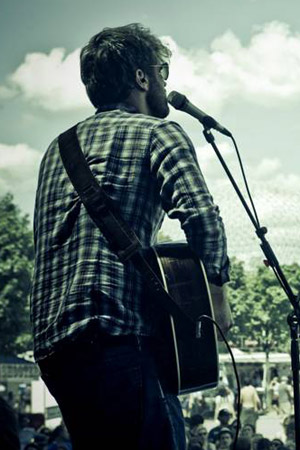 Montréal born singer-songwriter Ian Kelly writes music like he cooks, he puts in what he likes and hopes everyone enjoys. There is no recipe going in, just a lot of time and love for the craft.

In September 2008, Audiogram released Ian Kelly’s 2nd album “Speak Your Mind”. Straight away, it received great reviews and started selling in Quebec, where the promotional activities were concentrated. In its first quarter of release, the album sold 10,000 units allowing Ian and his label (Audiogram) to seek support from the Radio Starmaker Fund in early 2009. This was very important as we could see that PR generated sales were hitting a plateau.

Audiogram’s first campaign in February 2009 was at radio. They had strategically picked Chorus’ 98.5 FM to advertise the record as its star host, Paul Arcand, was consistently raving about Ian. This led to increasing album and ticket sales. 2009 was a difficult year and if it had not been for Starmaker, Ian would have probably had to go back to his day job. Starmaker’s support allowed us to keep touring and get his music out to the various regions of Quebec. The extra money also allowed us to tour under more professional circumstances, helping to build Ian’s profile.

In 2010, Audiogram moved to television advertising to support the record’s increasing sales, thanks to the artist’s presence on a high profile Quebec television show. This campaign was supported by the Radio Starmaker Fund and again provided positive results. Almost 18 months after its release, we saw the album go back into the Top 50 of the sales chart.

Starmaker also supported Ian’s international touring, allowing us to go to France, Belgium, the U.K., the U.S. and Germany over the past 2 years. The support we received solidified our ability to develop new territories and to deliver the kind of show necessary to impress audiences. We went to Europe to showcase at MIDEM and the Reeperbahn Festival with his full band which would not have been possible without Starmaker’s assistance.

We are proud to report that our last trip to Belgium saw Ian’s 3rd album, “Diamonds & Plastic” (IKM/Rough Trade), being launched in that territory with support yet again from Starmaker.

Thank you for believing in Ian’s project!