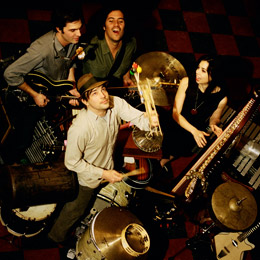 The Barr Brothers released their self-titled debut album in September of 2011 and began receiving funding from the Radio Starmaker Fund shortly afterwards. The RSF has supported national and international touring in 2012, as well as helping the band reach a larger audience through not only their live shows but multiple sessions and interviews with renowned publications and radio stations. This has significantly heightened their public profile and made them a highly anticipated act at The Edmonton Folk Festival, the Festival d’Été de Québec, the Montréal International Jazz Festival and the Regina Folk Festival. They have also been chosen “best performance” at festivals such as Pickathon and Bumbershoot, were number two on Rolling Stone Magazine’s list of “Bands to Watch for SXSW”, performed “Beggar in the Morning” on Late Night with David Letterman and charted for over twenty weeks on CMJ’s top 200. Most recently, they were long listed for the 2012 Polaris Prize, won a GAMIQ for “New Artist with the Most Potential” and have been nominated for three ADISQ awards. A big, big thank you to The Radio Starmaker Fund for helping to make all of this happen!