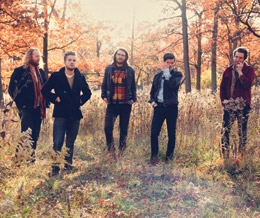 The Wooden Sky have seen significant support from the Radio Starmaker Fund this year in support of their album, “Every Child A Daughter, Every Moon A Sun”, released via Black Box Recordings. The domestic tour support program allowed the band to enhance the production value of their live performances via the inclusion of lights and sound, as well as aid with the band’s own personal expenses, allowing them to take the full eight weeks for touring completely off from work. It is safe to say that the scope of touring and the production value the band brought forth on their February - April 2012 album release tour would have been much different without the support of the RSF. In addition, the international tour support has been invaluable in affording the band the opportunity to tour in the U.S. and overseas in 2012. Though they are well established in Canada, the band is still very much developing in international markets and Starmaker’s tour program has helped subsidize the significant expenses associated with overseas touring - travel, accommodations, backline rental, staff, etc. Our ability to tour Europe in particular was integral to their landing a European license deal for their latest release with the U.K.-based Loose Music. This new partnership will afford the band more touring opportunities and will contribute to growing the band’s profile throughout Europe.