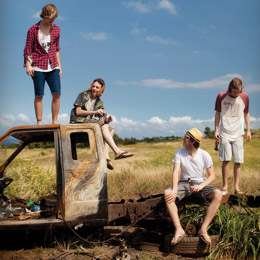 In the Spring of 2012, Current Swell signed to Nettwerk Records worldwide after releasing their current album Long Time Ago in Canada in late 2011 through Blue Heron/Warner Music Canada. Shortly after, they began receiving Starmaker funding which has played an important role in the band’s progression. First a trip to Brazil was funded, where they had long been known but had been unable to ever perform. This gave the group a strong indication of things to come and built confidence ahead of RSF supported summer dates including festivals and two shows with The Tragically Hip. Tours of Australia soon followed, helping flesh out a worldwide release schedule with Nettwerk. The releases were supported by Starmaker marketing funds in Australia, the U.S. and Europe. These successes have for the first time created financial stability for the band, allowing them to focus more time on their music careers ahead of recording a new album. As well, this increased exposure has allowed us to build our team, with labels, agents, publishers and other key supporters around the globe. We are extremely grateful for Starmaker’s continued support!