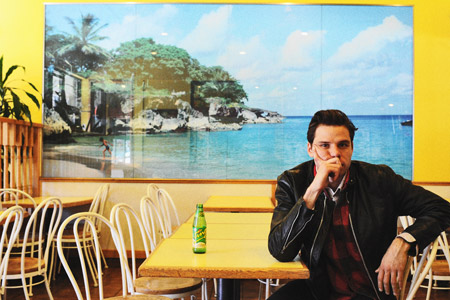 Bahamas is the solo project of Canadian artist Afie Jurvanen. His second album, Barchords, was released in February of 2012 in Canada and the United States and in April of 2012 in the rest of the world. The Radio Starmaker Fund has provided Bahamas with tour support that has enabled him to not only physically promote Barchords all over the world but also expand and achieve his artistic vision with regard to the Bahamas live show.

Early Bahamas live performances were just Afie on guitar and vocals along with a drummer. As opposed to his debut, Barchords included significantly more complex arrangements, particularly with the use of multi-layered vocal harmonies. Over the course of 2012 touring, the group grew from a duo to include 2-3 backing singers, an additional guitarist, a keyboardist and an appropriately sized road crew. Bahamas was able to do support tours for minimal fees per night opening for artists such as Jack Johnson, City and Colour and Noah and the Whale, performing at festivals, doing promotional appearances and fly dates (flying out for a particular performance). What the audiences took away was a fully-realized, engaging and powerful live show from a support act – completely enabled by the Radio Starmaker touring grants.

Promotionally, we did not have a single that took off at radio right away but Bahamas did station visits at every single major AAA and non-commercial station in the United States. These acoustic performances from the band won over Program Directors one-by-one. This in turn pushed the song “Caught Me Thinkin’” into the Top 20 at AAA radio. With Starmaker’s Marketing grants, we were able to keep the college and commercial radio promotional teams in place to continue calling stations, while also getting Bahamas in front of Program and Music Directors.

The publicity for Barchords got a great start including the front page of the Los Angeles Times Arts section, front page of the National Post and the cover of NOW Magazine. This led to a successful showcase at the South By Southwest Music Festival, where Bahamas was touted “Best of SXSW” by SPIN Magazine and the New York Times. Media grew slowly over months and months – most notably with an appearance on Late Night With Conan O’Brien in the summer of 2012. As Bahamas kept touring, Radio Starmaker funding enabled us to continue to hire back our publicists by territory, continually cycling back to media that may have passed or missed seeing him with more and more accolades and fuel as to why Bahamas deserved further media coverage. This led to Barchords making many year-end best of lists including iTunes Singer-Songwriter of the Year, #2 CBC Singer-Songwriter of the Year, #3 Q Album of the Year, #4 KCRW Album of the Year, #4 Exclaim Folk Album of the Year and finally, two Juno nominations.

The culmination of extensive touring – support and otherwise – radio play, radio promotion and publicity, as well as a bit of good luck have allowed Bahamas to move on to headlining act status and all of these were products of the Radio Starmaker Fund’s support.