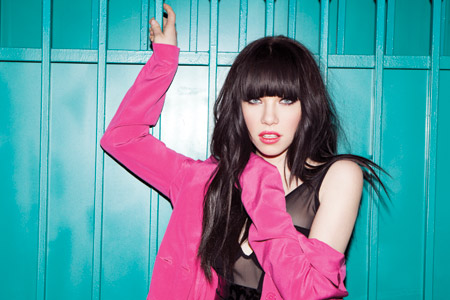 Carly Rae Jepsen is now a household name around the world but it wasn’t that long ago that the singer-songwriter from Mission, British Columbia was singing in coffeehouses. Carly auditioned for Canadian Idol and ended up going all the way to the final 3 contestants in 2007. She released her first album called Tug Of War in 2008 and then signed a record deal with 604 Records in Canada.

In 2012, Carly released an EP which included her single, “Call Me Maybe”. Justin Bieber heard the song on the radio and tweeted, “Call Me Maybe by Carly Rae Jepsen is possibly the catchiest song I’ve ever heard lol”. He signed her to his and his manager’s label, School Boy, in partnership with Interscope Records in America. Justin made a home video set to “Call Me Maybe” where he danced around with his celebrity friends and thus began the viral phenomenon of the year. Some of the most notorious video covers of the song included Katy Perry, the U.S. Olympic Swim team, James Franco, the Harvard Baseball team and even the Cookie Monster.

“Call Me Maybe” spent 9 weeks in a row at #1 on the U.S. Billboard chart and was the worldwide best-selling single of 2012. The Radio Starmaker Fund provided critical touring and marketing funding in Canada for the EP’s release. Following the momentum of her single, Carly then released her album Kiss around the world. Carly has since been nominated for a Grammy and won the Best New Artist Award at the American Music Awards.

Starmaker supported Carly’s touring from the beginning, starting with her opening up for the group Hanson. The RSF was also instrumental in funding Carly to go on tour with the very artist who shined the spotlight on her incredible song – Justin Bieber. She opened for Justin’s tour around the world in 2012 and 2013 exposing her to a global audience and gaining new fans and growing her profile exponentially. Carly now has almost 9 million followers on both Facebook and Twitter.

Having the backing of the Radio Starmaker Fund was fundamental to the marketing and touring activities which launched Carly’s career and profile not only in Canada but the rest of the world. Ensuring her ability to market her music and tour globally were paramount to Carly’s music not only being heard but embraced as one of the greatest pop songs of the decade.