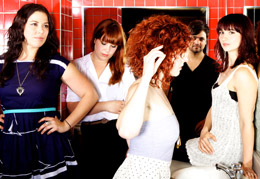 With the support of the Radio Starmaker Fund, we were able to tour 24 American cities as the support act for Atlantic Records recording artist Marc Broussard. This allowed us to reach a new audience and make contacts at important venues. We focused 2012–2013 on presenting at several showcases including South By Southwest, the Folk Alliance and the Canadian Arts Presenting Association, putting our band in front of important talent buyers and industry professionals. As a result, we were booked at major national and international festivals such as Festival d’Été de Québec and Festival International de Louisiane among others. We were featured on National Public Radio’s All Things Considered and A Prairie Home Companion – both key programs on U.S. radio. Since receiving support for our American tours, we’ve moved to one of the premier booking agencies in America which wouldn’t have been possible without the assistance of Starmaker. The support and encouragement of this program has been vital in helping us achieve our goals and we are very grateful to the Radio Starmaker Fund.