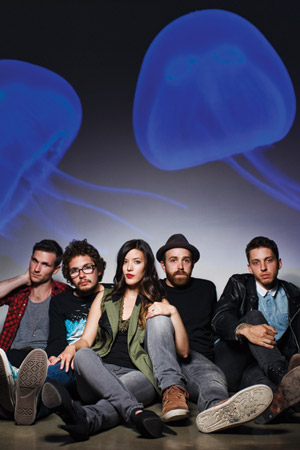 Vancouver’s Said The Whale has been on a steady upward trajectory for the past six years. They have toured relentlessly and continue to release great music including nationally charting singles. Their success was solidified when they received a Juno Award in 2011 for New Group of the Year. In March of 2012, they released Little Mountain, which marked the evolution and maturity of the band.

The development of Said The Whale, began as a humble and organic process that over time revealed its true potential. With the financial assistance of Starmaker, Hidden Pony Records was able to set up campaigns at radio and in the media, while also strategically coordinating effective marketing and promotion around all band activities, including creating awareness around national tour dates. Starmaker funding also allowed us to run extensive print and online advertising campaigns, as well as social marketing initiatives. The support led us to further develop their sales at both physical and digital retailers through co-op advertising and retail specific campaigns, such as price and positioning and in-store performances at flagship locations. The assistance we received from Starmaker for Little Mountain undeniably helped with the success that we are presently having with their latest release, hawaiii. The band’s first single from this new release reached #1 on the Canadian Alternative Rock radio chart.

Whether it be tour support, domestic marketing or international promotional assistance, Starmaker has been a critical and unfailing resource for the band. This can be clearly observed by virtue of their success in Canada. It is perhaps even more significant when looking at how Starmaker assists Said The Whale in the United States. In the U.S., Said The Whale must stand out amidst an ocean of what are domestic priorities. Being Canadian, the band is not as present “on the ground” as the artists that call the country home. It is in this market that Starmaker’s assistance is particularly meaningful because of the amount of ground-breaking work needed to blaze a trail for the band. Most importantly, succeeding in the American marketplace is not only an extremely expensive proposition but also a highly risky endeavor. Said The Whale’s success in international markets such as America is both a testament to the band as artists, as well as undeniable proof that Starmaker’s financial assistance has genuinely and positively impacted their development as a world-class recording and touring act.