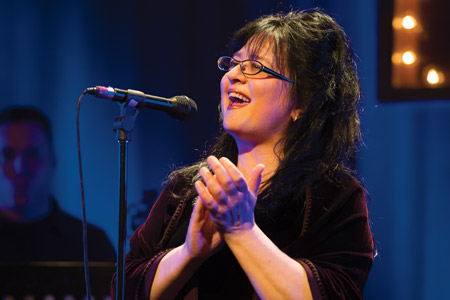 Recognized for the gentle, warm voice that she brings to authentic interpretations of jazz and blues numbers, Susie Arioli has carved out a solid reputation for herself in Canada and on the international scene. With over 260,000 albums sold in her career, the Montreal singer has enjoyed increasing popularity around the world.

Susie has released seven studio recordings and has been nominated three times at the Junos. In 2009, she was awarded the Oscar Peterson Prize “honouring her contribution to Canadian jazz and the high level of her art”. Following the success of her album Christmas Dreaming, she’s taken another step with her latest album titled All the Way, released in Canada in the Spring 2012 on the Spectra Musique label. This record was named Album of the Year – Jazz Interpretation by ADISQ in 2012.

All the Way has garnered international releases, through a licence deal in the U.S. with Jazzheads Records and in the rest of the world with Harmonia Mundi/Jazz Village. The support received from the Radio Starmaker Fund allowed us to significantly enhance our international partners’ marketing efforts in the U.S. and in Europe. We hired a radio promotion and publicist team in the USA, which resulted in All The Way reaching the #1 position on the iTunes Jazz chart in the States. We also deployed an advertising campaign in France for the release of All The Way, which included a month long billboard campaign in the Paris subway.

Starmaker has also supported Susie for showcases at the Association of Performing Arts Presenters Conference, as well as numerous successful tours in Canada, Europe and the USA over the last few years, helping to broaden her fan base.

Susie, Spectra Musique and her management team are grateful to Starmaker for the support and funding received. Thank you so much!