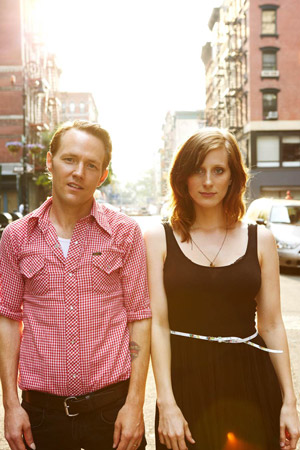 Since the release of The Fate of the World Depends on This Kiss, Whitehorse has reached some important milestones, including their debut for a packed house at Massey Hall and a spot on the Polaris Short List, two very proud moments for all involved.

In early 2012, Whitehorse hit the road across Canada for the official album release tour. These would be the first shows across the country with the new songs and Starmaker’s touring support allowed the duo to develop a thrilling, complicated and creative way to showcase their material. This tour was an opportunity for Luke and Melissa to demonstrate everything that is new and exciting about Whitehorse in front of their biggest crowds yet and with Starmaker’s help, they were able to realize their musical vision from coast to coast.

The Radio Starmaker Fund’s support has also been instrumental in making it possible for Whitehorse to spend extra time on the road in the United States and to extend their touring schedule to include in-studio sessions at stations across the USA. With Starmaker’s assistance, radio campaigns across multiple formats supported the album release. As well, Whitehorse has found a top-quality publicist to support their efforts. In 2012-2013, the band had the opportunity to showcase at invaluable industry events such as South By Southwest, the Americana Music Festival, M for Montreal and more.

Starmaker’s investment in and support of Whitehorse’s career has helped to give the band the creative freedom and resources to carry out their plans and reach their goals.