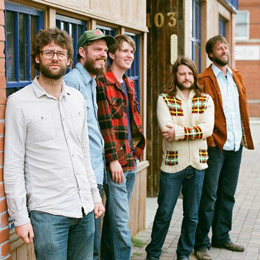 The Deep Dark Woods retreated to a cabin in Alberta with cult California producer Jonathan Wilson (Father John Misty) to make Jubilee, their newest record and the follow-up to their Juno nominated The Place I Left Behind. When they emerged, they had a collection of songs that showcased new heights of finesse and depths of song-writing in their signature melancholic melodies and swirling folk-psych sound.

The Radio Starmaker Fund has supported the band’s ability to bring this record to audiences across the world, from the Fund’s contribution to album release marketing, including stunning original poster art placed in a highly visible street campaign in downtown Toronto, through to radio advertising in Western Canada, album launch video materials and much more. In addition, Starmaker has bolstered the band’s touring efforts, allowing them to travel across Canada and back, tour extensively in Europe and throughout North America. The band has been able to develop their profile in key “jam band” scenes in the USA, particularly in California, where intimate festivals drive buzz on new acts. Starmaker has also made it possible for the band to attend this year’s BreakOut West and WCMAs in Winnipeg where they are nominated for Roots Group Recording of the Year and booked to perform multiple showcases. From the moment Jubilee was released, the RSF has supported The Deep Dark Woods and the efforts of Six Shooter Records.