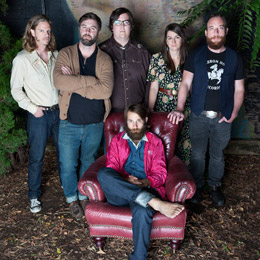 The Radio Starmaker Fund’s support of The Strumbellas has been an integral part of the band’s trajectory from a fledging Toronto act to recognized North American recording and touring artists. They were able to cast their audience net further by opening for Corb Lund in Ontario, touring Canada in a more enduring and penetrable way and launching their album, We Still Move On Dance Floors, in the United States on their own label. Starmaker has made it possible for them to tour vital audience-building regions across the US, in a timely fashion that might not have otherwise been attainable. They hired a reputable US radio and publicity firm, which has been able to get the band’s music to the right ears, resulting in a great foot in the door at important news outlets, as well as Americana and NPR radio. This media and promotional support is of great value to promoters, festivals and venues in the US, alleviating the burden of unsupported performances.

Summer festival marketing initiatives allowed for a wonderfully effective dovetail of online marketing, cross-promotion and social media marketing. They have been able to confidentially move from The Horseshoe to The Phoenix for their November show in their largest market of Toronto, undertaking an outdoor marketing campaign that will reinforce the album and the band. The Strumbellas’ growth as viable artists, including their Juno win, Polaris Music Prize long list nomination, Indie Music Awards win and Ottawa Bluesfest Supernova Rising Star Award is a result of their hard work and drive, as well as the support of the Radio Starmaker Fund.