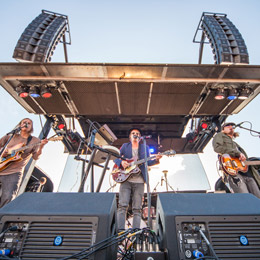 Current Swell’s newest album Ulysses has achieved new levels of success that would not have been possible without Starmaker support. In Canada, the album landed at #1 on the iTunes rock chart, #10 on the alternative albums chart and reached a career high top 50 debut on the Top 200 chart, while the second single “Rollin’” was the #1 most added track at alternative rock radio.

Additionally, the band has been able to build their international fan base due to subsidies for touring and marketing outside of Canada. They have visited Australia, Brazil, Germany, Holland, the UK and the US repeatedly with the likes of Sam Roberts, Family of the Year, Xavier Rudd, The Beach Boys and The Skints. Subsequently, these have become the band’s largest markets, enabling their return. The combined effort of the marketing coupled with touring has helped establish a solid foundation that will be used to aid in their continued growth.