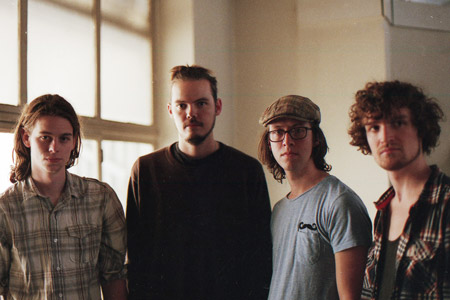 Half Moon Run is a four-piece band from Montreal. Their debut record, Dark Eyes, was released in Canada on Indica Records in March of 2012. The band has been fortunate to experience a progressive build in both international and domestic markets, which led to the international release of Dark Eyes through Glassnote Records in the United States, Europe and Australia in 2013. The album has sold over 60,000 units in Canada and over 100,000 copies worldwide.

Following the Canadian release, the group embraced their road warrior status playing upwards of 170 shows in a year’s time across Europe, North America and Australia. This perpetual touring has been greatly aided by the Radio Starmaker Fund, which made the countless nights on the road both affordable and a little more comfortable. Opening for bands like Of Monsters and Men, Billy Talent, Mumford & Sons and City and Colour provided Half Moon Run with invaluable exposure. Their touring efforts came to fruition this summer for the band’s homecoming performance on Osheaga’s main stage in front of a sea of fans that took over the festival grounds. It was a joyous moment for the band and all parties involved in their success to this point. They now will be concentrating their efforts on writing the follow-up album over the Winter.

The adoption of HMR’s single “Full Circle” at radio was a gradual process. Local Montreal stations quickly jumped on board and out of province alternative stations followed suit. UK radio play occurred similarly as the single climbed the charts, eventually achieving A-list Radio 1 status. When it came time to launch their second single, “Call Me in the Afternoon”, the success came much more quickly. In Canada they reached #16 on the Mediabase Alternative chart and #23 on the BDS Modern Rock chart, while in the UK the track enjoyed A-list Radio 1 status as well as XFM daytime play, helping the band sell out their Shepherd’s Bush Empire headlining show in London. Similar high rotation was achieved at top tier stations in Australia on Triple J and in the Netherlands at Voor 3, resulting in sold-out tour dates in both markets.

The culmination of international marketing, radio servicing, PR campaigns and extensive touring – made feasible by the support of the Radio Starmaker Fund – has made Half Moon Run an international success story with a global audience anxiously awaiting the follow-up to Dark Eyes.