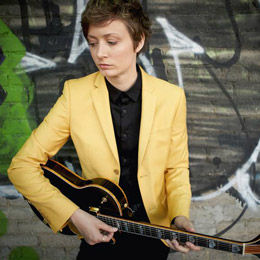 Halifax singer/songwriter Mo Kenney arrived in style with her 2012 self-titled debut album, produced by her musical mentor, Joel Plaskett. A crystalline voice and the disarming honesty of Mo’s songs resulted in an immediate and warm critical embrace from the national media. CBC Radio 2 was an early champion and her song “Sucker” went on to win SOCAN’s prestigious Songwriting Prize in 2013. Pheromone Recordings worked her debut album for 18 months, through tours with Joel Plaskett and Ron Sexsmith, ultimately leading to festival plays and her own headlining shows. She also travelled to Australia, the UK and Ireland, touring with established artists and playing festivals in those regions.

When an album has legs by definition there are continuing initiatives and the Radio Starmaker Fund played an absolutely crucial role “stoking the star-making machinery behind the popular song”. Starmaker was there to help facilitate domestic and international touring and to defray the cost of continuing marketing initiatives deep into the album’s life cycle. Mo has a richly deserved place among the latest wave of emergent Canadian artists but the progress she made on her debut would not have been possible without the support of the Radio Starmaker Fund.