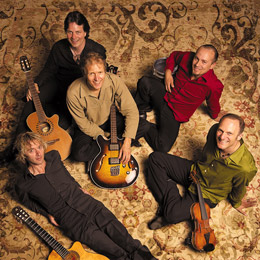 The Juno nominated Sultans of String released their 4th album Symphony! in September of 2013 and have been on an upward trajectory since, winning the 2014 Sirius XM Award for World Group of the Year. With the support of the Radio Starmaker Fund, we have been able to expand touring into new domestic and international markets. In Canada, we have played from coast to coast, not only in clubs and as part of concert series but with major orchestras in concert halls as well. Internationally, Starmaker has made it possible to play at taste-making clubs, major radio stations and festivals. The Radio Starmaker Fund has enabled us to place key ads in major publications and hire a radio tracker and a publicist to break into the US market, with the result being increased buzz and awareness. This led to being signed by Alma Artist Booking, who represent the very best in world music. Your generous support has been instrumental in our success this past year, playing a pivotal role in increasing our live performance, marketing and press opportunities, garnering dozens of news articles and reviews for Symphony! leading to landmark performances with the Toronto Symphony and selling out Koerner Hall. Thank you for all your support!