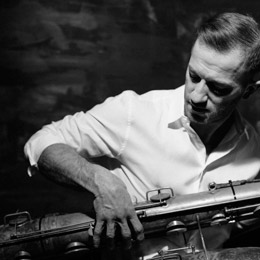 Colin Stetson has never waited for opportunities to land in his lap. His choice to move to Montreal where he found a musically nurturing environment has situated him within a swelling pool of extraordinarily talented peers whose collaborative efforts have supported Colin’s current privileged position as one of the world’s most singular and unique horn players. And for the past year, Colin has counted the Radio Starmaker Fund as one of his most important allies. His tour schedule cannot be too overloaded due to the physical demands of his performances and with requisite days off between concerts and horns that weigh as much as a human and require their own travel fares, Starmaker is indeed a blessing for the high cost of such outings.

The RSF has allowed Colin to take on ambitious tours in many corners of the world in support of his most recent release, the Polaris Music Prize nominated New History Warfare Vol. 3: To See More Light. Starmaker assisted Colin’s first European tour of the release cycle and his first solo Australian tour earlier this year. He appeared on ABC national radio, at the Mona Foma Festival in Tazmania, sold out 2 shows in Melbourne, as well as 2 others at the Sydney Festival. We are convinced that Colin’s career will continue to flourish and greatly appreciate the support of the Radio Starmaker Fund.

Applications to the Radio Starmaker Fund are evaluated on four major criteria:

In order to qualify for the Radio Starmaker Fund, artists are required to reach prescribed sales levels by genre and demonstrate a financial commitment to the marketing of their recorded project. For a detailed description of our criteria please visit our website at www.radiostarmakerfund.com. Furthermore, the artist must be a Canadian citizen or landed immigrant and the ownership of the master recording must reside with a Canadian company.

We continue to fund artists from a wide variety of musical genres and from every region of the country.