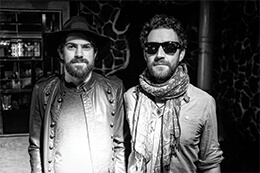 In March 2017, the Harpoonist & The Axe Murderer released their fourth album Apocalipstick, a follow up to A Real Fine Mess, which had received a JUNO nomination and commercial radio play. Our goals with Apocalipstick were to raise the band’s market share in Canada through headlining tours, festival dates, success at commercial radio, publicity and social media strategies. With these goals in mind, Matt and Shawn from H&AM decided to add a drummer and a singer to their national tour and hire a tour manager to facilitate an intense publicity and radio interview schedule. This strategy was successful as can be seen by the number of sold-out shows, the cover of the Georgia Straight, radio interviews, sales and their 2017 win at the Western Canadian Music Awards for Emerging Artist of the Year. Without the support of Radio Starmaker Fund, we would never have been able to take these risks and expand our marketing reach.

A year and a half ago we made the decision to develop the band in Europe. This would not have been possible without the help of Starmaker. As the band started from scratch in these markets, the level of risk, investment and development necessary were daunting. From the start, the RSF supported the band through three tours and various publicity and marketing initiatives, allowing the group to play a host of different shows and spend time on promotional opportunities. The benefit of this collective work culminated this September when the band was asked to be Album de la Semaine on CANAL+ in France. Their show at the Reeperbahn Festival in Germany saw a lineup around the block before the band even hit the stage. For an unknown band from Canada, this was a pivotal moment – a moment which would not have been conceivable without the support of the Radio Starmaker Fund.