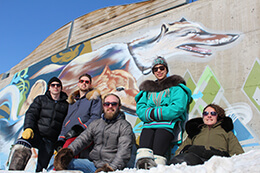 The Jerry Cans released their album Inuusiq/Life in November 2016. Since its release, Starmaker funding has been essential to the success of the album, both across Canada and internationally. With the help of Starmaker tour support, we have performed over 150 times across Canada, Australia, Iceland and Norway. The significance of this funding support is further emphasized considering the approximate $2,000 travel cost from our home community, Iqaluit, to any southern major center. Without Starmaker support, the Jerry Cans touring potential would be extremely limited. The RSF has allowed the band to access key marketing and tour support funding to pursue our music careers full time while continuing to call Iqaluit, Nunavut our home.

Currently, we are the only band from Northern Canada accessing Starmaker funding. The band has been actively promoting the funding opportunities to other Nunavut artists and will continue to do so. The Jerry Cans are very thankful for the support provided by Starmaker and look forward to working with the organization to continue to build the northern music industry.