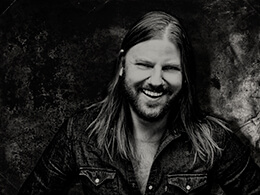 Montreal JUNO award-winning blues singer, songwriter and guitarist, Steve Hill, has made major strides with his career over the past two years as a result of a lot of hard work, good fortune and the support of the Radio Starmaker Fund, which has been instrumental in helping take him to the national and international stage. Steve toured relentlessly in Canada around the release of his recent album Solo Recordings - Volume 3, by accessing funding from the Starmaker domestic touring program. This created a national buzz that allowed him to build his fan base across the country.

In January and February 2017, Steve was able to introduce his powerful one-man-band performance to Europe when he was invited to support British rock legends, Wishbone Ash, with the support of Starmaker’s international touring and marketing programs. For an artist like Steve Hill, touring and marketing the tour and physical release of the album in each territory is paramount to his success. Without the vital support of the Radio Starmaker Fund, it would be impossible for an independent artist like Steve to take on the associated costs of such extensive international touring, even though it is a necessity in building a long, prosperous career.