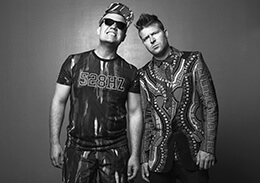 USS received funding via the Radio Starmaker Fund's domestic and international touring programs to support their latest release, New World Alphabet, which was released on January 13, 2017, on Coalition Music (Records) / Warner Music Canada. This was the first USS album to be released in Germany, Austria, Switzerland, Italy, France and Japan. With Starmaker's generous support, USS was able to perform 50 shows across all of these territories in 2017 alone.

Without the financial support of the Radio Starmaker Fund, making inroads in all of these markets would have been next to impossible. As a result, USS was able to maintain a meaningful touring presence in these key territories, starting in small clubs, which led the band to performing at major festivals this past summer, as well as national sync placements on German, Austrian and Swiss television networks.