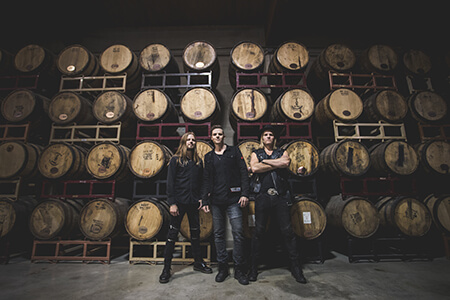 One Bad Son’s success story illustrates how the Radio Starmaker Fund can support Canadian talent and help them achieve new levels of success. The band was able to grow and expand their career by touring and promoting their material across the country while simultaneously building their fan base. Here are some quotes from the band on how the Fund has impacted their career and the success they have had to date.

"Starmaker has had a MAJOR impact on our career and our lives. While we've achieved serious success across Canada over our years as a band, we are still working toward the goal of playing music for a living. We're close but not quite there. Starmaker has allowed us to tour every corner of Canada and develop fans from coast to coast. It has also made it possible for us to break into new markets such as Germany."

"On our last tour of Ontario, we knew we needed to hit every market possible in order to generate the maximum excitement around our new single ‘Raging Bull’. There were a lot of miles and many tertiary markets hit where the guarantees were not as high as in larger markets. Starmaker helped us with all of these dates and the result – after 15 days of non-stop driving, gigging and radio stops – was that ‘Raging Bull’ became the first #1 single of our career. We are incredibly grateful that Starmaker helped us get there."

"From the moment One Bad Son became a Starmaker band, so many doors have opened! It's allowed us to do SO much more on tour, from booking that extra show to securing more radio interviews and press opportunities. Starmaker funding lets us focus on what we should be focusing on: being creative and connecting with our fans."

As you can see, the band’s success has been directly influenced by Starmaker’s touring programs but further, the Fund allowed us to make a significant investment in online advertising, publicity and at radio. Publicists, radio pluggers and media agencies were all hired to support and build momentum for the release and tour. The benefits of this were realized when the aforementioned “Raging Bull” (the first single from the band’s upcoming album) went to number #1 on the Canadian Rock charts for four weeks. This is a really positive space to be in while gearing up for the new album release and fall tour, which will take them across Canada and to Germany for the Reeperbahn Festival. Thank you to Starmaker for all your support over the years.