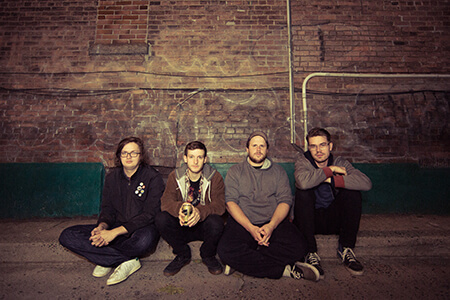 The Radio Starmaker Fund has been an invaluable resource, profoundly impacting the success of this project and the lives of the four members of PUP. We have seen extensive growth over the past few years on the back of our sophomore record The Dream Is Over, released in May 2016. The album went on to receive extensive critical acclaim, a Polaris Prize shortlist nomination and the SOCAN Songwriting Prize. Additionally, the band toured the world, selling out headline shows on nearly every continent in rooms ranging from 500-1,500 capacities.

Thanks to RSF touring support, PUP have been able to maintain a rigorous worldwide touring schedule. The Fund also enabled us to book our first major headlining tour in the UK and Europe, which would have resulted in a major loss and may not have been affordable to undertake without Starmaker support. With it, the band was able to go overseas, develop a strong buzz and gain traction in the market. Our next European headlining tour was a major success thanks to this groundwork, with nearly every show sold out, extensive support from BBC 1, NME, Kerrang! and key tastemaker press across continental Europe.

We were fortunate to also receive Starmaker domestic marketing support, as well as international marketing monies in America and the UK. In Canada, the Fund allowed us to hire a radio plugger and execute a major online and postering campaign, as well as a number of other important initiatives. It also allowed us to film the band's Toronto release show at The Phoenix Concert Theatre. This footage has been used to sell various promoters and late-night bookers on the band, has contributed to landing prime festival slots worldwide (including Lollapalooza, Osheaga, WayHome, Boston Calling and Sasquatch) and has recently helped us land our television debut on Last Call with Carson Daly.

Starmaker funded a small digital and print ad campaign in the US, radio pluggers in the US and UK and a publicist in the UK. Thanks in part to the Fund, the UK and US have become two of PUP's biggest territories, where we are capable of selling over 1,000 tickets in major markets. We consider these international campaigns to have been well executed and have been pleased with their impact. In particular, our UK publicity has been phenomenal with features in nearly every relevant UK music site and magazine.

PUP continues to tour aggressively on the back of The Dream Is Over, with some final American dates and a lengthy UK and Europe run to cap off the album cycle. We are extremely grateful for the support of the Radio Starmaker Fund and believe that much of what we have accomplished over the past year could not have been possible without the support of this Fund.