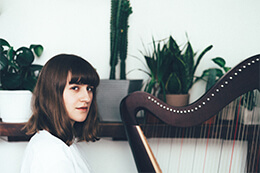 For a debut artist, touring is a crucial but expensive part of developing a strong fan base in both domestic and international markets. The grants received from the Radio Starmaker Fund allowed Emilie & Ogden (Emilie Kahn and her harp, Ogden) to play over 100 shows supporting her debut album 10,000, including a three-week tour in the United States opening for Half Moon Run and three separate European solo tours. The funds helped Emilie to access markets where the low amount of compensation would make touring otherwise impossible and to re-visit territories such as France, where the response was extremely positive. They also enabled the artist and her musicians/technicians to travel in better conditions, hence delivering the best live performances possible. While in those territories, Emilie was also able to undertake important live sessions and other promotional appearances. The album 10,000 now has over 2.5 million streams on Spotify and Emilie has a strong base on which to grow her career, in part due to the Radio Starmaker Fund.