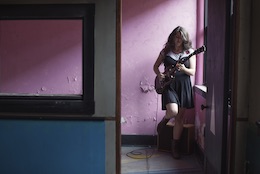 I've been touring New Mistakes since I stepped out on the road with Bruce Cockburn in September 2017. I have played over 200 shows on four continents in that time, with the album licensed to labels in Australia, Italy and Japan. I've been incredibly lucky over the past year to be able to share my songs with audiences around the world, and to share the stage with many great players: Willie Nelson, Tedeschi Truck Band, Sturgill Simpson, and I got to play songs with my hero, Jackson Browne, at a party at George Stroumboulopoulos' house – I can't write this stuff! I feel a more profound commitment to music than ever and feel blessed to have been able to sing my songs all over the world, in places I never thought I would get to see, like Japan, Australia and Switzerland.

It has been amazing being able to forge connections with audiences, influencers and industry in territories around the world, and it has made my goal of becoming a truly global artist more tangible. I have no illusions about how much work and how many more shows go into making this vision real. Earning the support of Canadian fans, critics and media – such as New Mistakes earning JUNO and Polaris nominations – is one thing; doing the same in every major territory within the life of an album cycle is another entirely. I'm up for putting in the miles but climbing this mountain would be impossible without the bedrock financial support of the Radio Starmaker Fund. Their backing makes it possible to get me into these territories, to market my tours, to get my videos in front of tens of thousands of new fans, and to get my songs heard and embraced around the world. For that I am forever grateful.