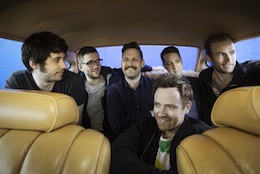 The Radio Starmaker Fund was integral to the continued growth of Royal Canoe during the release cycle of their last album, Something Got Lost Between Here and the Orbit. Most notably this funding allowed Royal Canoe to expand their reach to new touring markets. This included expansion to new Eastern European markets like Poland and Ukraine in addition to continuing to develop and grow their audiences in other European markets like Germany, the United Kingdom and France.

Royal Canoe was also able to play some huge-exposure festival opportunities like Atlas Weekend in Ukraine, Open Air in Luxembourg, One of a Million in Switzerland, Maifeld Derby in Germany and others. Additionally, the band was able to return to markets that have been traditionally strong for them with a renewed marketing push. This included treks through Canada and the United States to hit important markets like New York, Los Angeles, Vancouver and Toronto plus everywhere in between. Highlight festival plays in North America included Field Trip in Toronto, Vancouver Jazz Festival, Art-a-Whirl Festival in Minneapolis, UPDT Fest in Edmonton and others.