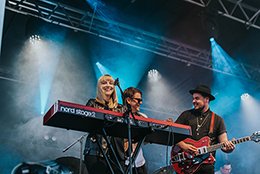 Port Cities has enjoyed tremendous success with their self-titled debut recording, due in large part to Starmaker support. The band achieved Starmaker eligibility early on and has accessed marketing and touring funding that have allowed them to export to international markets such as the US and UK and to build on the foundation laid in Canada for live performances. Without Starmaker, the band’s development would have been restricted to Canada and would have levelled off a year ago. With Starmaker, we’ve been able to continue an upward trajectory in Canada with tours across the country for artists like Steven Page as well as select festivals dates and to lay the groundwork necessary internationally.