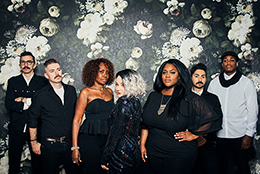 Toronto based Samantha Martin & Delta Sugar received funding via the Radio Starmaker Fund’s international touring programs to support their albums Send The Nightingale (2015) and Run To Me (2018). Both recordings have received massive airplay in North America, have also crossed overseas into the UK Blues Radio Top 40 charts as well as receiving dozens of rave reviews. This year Run To Me was nominated for a JUNO Award for Blues Album of the Year.