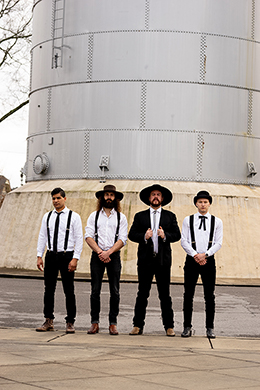 On October 11, 2019, The Dead South released their third album, Sugar & Joy, worldwide via Six Shooter Records. The album made its debut at No. 1 on Billboard’s Bluegrass Albums chart, No. 3 on the UK Americana Albums chart, No. 2 on Canada’s iTunes chart, and reached numerous other impressive international sales charting positions including iTunes Top 10 in Australia, Sweden, Denmark and beyond. All of these achievements are firsts for the band. In the USA, the album release promotion was supported by Starmaker’s international touring program. This allowed the band to focus on appearances and performances such as a Sirius XM session, important in-stores appearances and stops at radio stations and industry conferences in between.

With Starmaker’s support, Six Shooter has been able to invest in building innovative, game-changing processes and marketing pieces that have contributed to the initial and exciting sales successes, and which will continue to support Sugar & Joy and The Dead South as they tour steadily for the next 18 months and beyond.