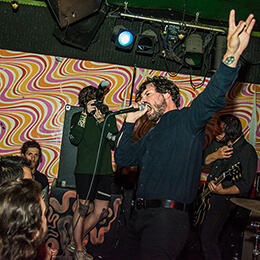 Since breaking into the Radio Starmaker funding circle, Single Mothers has been able to take far more risks than they could have ever financially dealt with in the past, such as allowing the band’s tour cycle to incorporate several more support slots than previously would have been feasible due to the lower guarantees those types of tours allot. We have been able to effectively push the touring cycle of the Through A Wall album to be twice as long as the previous release, Our Pleasure, as a result, reaching far more fans than ever before.

Additionally, this funding has been paramount in keeping the group afloat during the COVID-19 pandemic lockdowns and travel bans, allowing band founder Andrew Thomson to write a multitude of new music to continue pushing the band into new creative territory. We are hoping that this funding – despite coming at a time where it is harder than ever to connect with fans due to legitimate physical restrictions and increased online “noise” – will afford us the opportunity to build a large catalog of new and exciting material to attack the market with more enthusiasm than ever when the pandemic restrictions start to lift. We are fortunate to have RSF behind us. This fact is not lost on us.