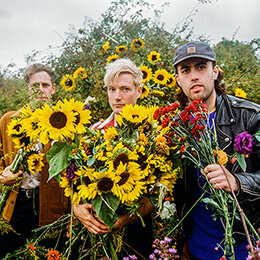 Radio Starmaker has allowed Hamilton, Ontario based The Dirty Nil to deliver their signature high-energy live show to a bigger audience in markets across North America and beyond. 2018/2019 saw the band play their most extensive US headline tour to-date as well as a successful headline tour of German clubs. The band was able to bring crew on the road (and sleep in clean hotels every night) and create high quality video content to keep their audience engaged and following along with the tours.

2019 saw The Dirty Nil playing some of the largest festivals and stages they’ve ever played, including Ottawa Bluefest as well as Toronto’s Budweiser Stage, where they played the main stage supporting Alexisonfire; Hurricane & Southside festivals in Germany; and Epicenter in North Carolina, where they played first on the main stage which was headlined that night by Foo Fighters. In 2020, with support from Radio Starmaker, The Dirty Nil embarked on their most unique tour to-date - a virtual tour that saw the band perform via livestream from a green-screen studio with professional sound/lights/video. Each date was presented by a local venue and radio station and each performance and background imagery custom curated to the corresponding city.